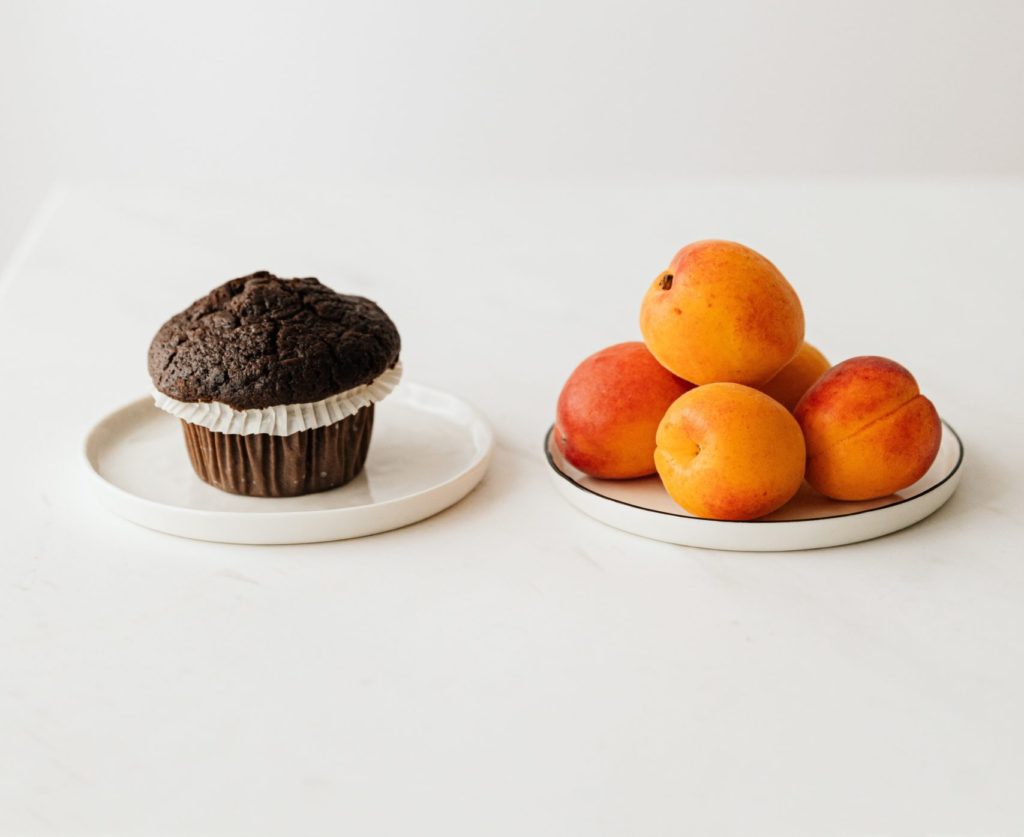 I’m sure nearly everyone has been in a situation where they have eaten something high in calories like chocolate or ice-cream, or they have eaten to the point that they’re so full that they needed to undo their pants on the ride home and have gone into a spiral thinking I’m such a bad person, I failed, I’m terrible, I can’t believe I did that… And I want to break down how letting go of the idea of good and bad foods, and being mindful of what you’re eating, can help stop that spiral.

We’ve been conditioned to view foods as either good or bad. And then by extension, we are good or bad depending on what we eat. There are foods that are more nutrient dense and play an important role in our overall health and wellbeing but we’re not morally superior by eating these foods. Nor are we morally inferior for eating foods that are less nutrient dense and more calorie dense. You’re not a bad person for eating these foods or for overeating.

By now, we have kind of moved on from the idea that we have to earn our food through exercise, but sometimes people will justify eating these higher calorie foods or overeating by saying, I’ll just use it as fuel in the gym, which is just another way of saying you should earn your food. And it’s kind of saying that if you don’t work out, then you don’t deserve to eat those foods, which is simply not true.

For your overall health and wellbeing, I’d prefer that these foods didn’t make up the majority of your intake as they generally lack sufficient nutrients, and are not great for your overall digestive health and consistent energy, but you aren’t a failure or a bad person by choosing to eat them.

Note how I said choosing to eat them.

This is where being mindful of what you’re eating and why comes into play.

When you eat these foods, focus on what you’re doing, how it tastes, and how you’re feeling. Be conscious of every bite you take. Ask yourself, do I really want this? Or am I eating it simply because it’s there? It’s even ok to put it away and go back for more later.

If you’re regularly mindlessly reaching for higher calorie, less nutrient dense foods, firstly become conscious of the habit and then take some time to explore why.

Are you looking for a quick energy boost?
Are you thirsty?
Are you lacking protein and fibre?
Are you avoiding something?
Are you seeking comfort?

Using food for these reasons is a very human thing to do. And you’re not bad if that’s what you’re eating for, but examining your food choices and the reasons behind them can be really helpful.

It can help you make changes where you want to, and it can also help you feel more in control of your food choices. This in turn can then help you separate your food intake from a sense of morality so that when you eat, say three quarters of a block of chocolate, you won’t feel out of control or like you’re a bad person because you’ve consciously chosen to do this, fully aware of the impact that it may have on your energy and digestion.

It might sound like it’s a lot of work to go through this thought process every time you eat these higher calorie, low nutrient dense foods, but, over time, you will be able to separate the morality from the food intake and you can enjoy these foods and simply move on. And it’s a lot less exhausting when you’re not constantly putting yourself down or going into a moral shame spiral every time you eat some chocolate, right?